If you like thriller movies, you must heard of this chapel in Da Vinci Code.

Rosslyn Chapel is a very special chapel, it is also unique and beautiful (if you are into that sort of thing). Located in a town called Roslin which is not very far from Edinburgh. Also, we found a cottage in the same road (cul-de-sac) which is very handy.

The chapel contains an amazing amount of carvings of religious and pagan designs. When you enter, the best thing to do is just sit there and slowly take in the magnificence of the work. Throughout history, the chapel is surrounded by mysteries and rumours – connections to the Templars, hiding place of the Holy Grail and many others.

At the far end of the Lady Chapel is the access to the crypt where in Da Vinci Code when Tom Hanks opened the door, he was transported to the studio where they shot the scene when they worked out Jesus’ bloodline.

They said that it was believed that this keystone mark the spot where the Holy Grail was hidden.

There are a lot of them around here – a hundred or something. It is a pagan symbol that represents nature’s growth and fertility, showing the unity of man and nature. I like the Greenman story we saw in Rosslyn Chapel. In this version, the Greenman was Adam. After he was ousted from the Paradise (Eden), Adam lived a good life and was constantly wondering whether God forgave them of their sin. His dying wish was for one of his sons to check out the Garden and ask his question. An angel showed the Tree with the snake at the bottom sleeping and baby Jesus on of the branches wrapped in cloth, waiting for his time to come. The angel also gave the boy seeds with a cryptic instruction that the boy will know what to do when the time comes. On his return to Adam’s deathbed, he was told that God was a god of forgiveness and his son gave him the seeds and he died. Thus, Adam became the Greenman.

The ceiling above the Choir is covered in stars and flowers. The craftsmanship of the roof is amazing, it has no wooden supports but it survived wars, abandonment and bad preservation techniques! It is a miracle that it’s still there today. If you look closely, you will find a symbol or four hidden among the stars.

After visiting the chapel, we went to see the site of the castle.

Rosslyn Castle was burnt to the ground and this is all the remains of it today.

It was a very interesting visit. Some children might consider this a boring place – a church. Fortunately, mine were intrigued by the carvings and the myths surrounding it. So in all, we had fun.

Fact: Thanks to Da Vinci Code, the number of visitors to the chapel grew and that it helped the preservation works of the chapel.

Note: As photography is NOT allowed in the chapel, thanks to two photographers who fought, hurt each other and sued the chapel, I used the images provided in the souvenir CD I bought. The copyright for these images belong to RCT/Antonia Reeve. All the other photos with watermark are mine. 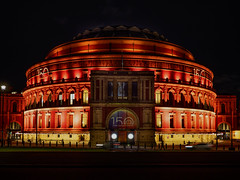 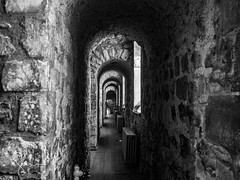